900-year-old earthenware bottle bears a symbol of modern medicine on it.

THE BOTTLE WILL BE EXHIBITED AT ŞANLIURFA MUSEUM

The 900-year-old bottle with the image of two snakes twined, the symbol of today’s medicine, on it, dates back to the Zengids, a Turkic dynasty that ruled the Levant and Upper Mesopotamia on behalf of the Seljuks, Mehmet Onal, an archeology professor at the Harran University in southeastern Şanlıurfa province, told Anadolu Agency. Nur ad-Din Zengi, who succeeded his father in 1146, ruled for nearly 30 years until the Zengid dynasty was replaced in Syria by the Ayyubids, led by Saladin. 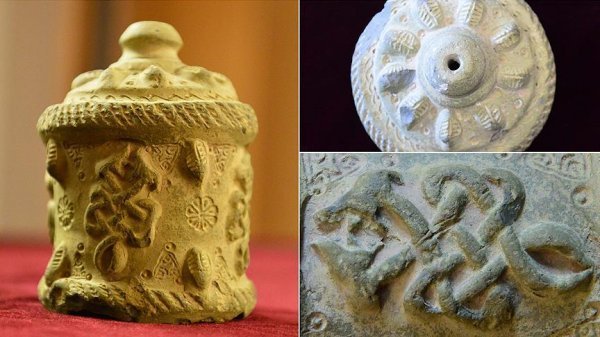 The archeological discoveries imply that Harran could have been an important medical center throughout history, according to Onal. The head of the excavation team also said the medicine was produced and put in these bottles, and it was sold here. The bottle will be exhibited at Şanlıurfa Museum.

Harran, Şanlıurfa, currently on UNESCO's Temporary Heritage List, welcomes thousands of local and international visitors with the world's first Islamic university and the remnants of the Ulu Mosque, dating back to the 700s in the Umayyad era.