Turkey will not postpone its artificial sea-level waterway Kanal Istanbul and will start the project by initiating its tender as soon as possible.

Turkey will soon hold a tender for a gigantic canal project on the edge of Istanbul, President Erdoğan said on Thursday, despite calls from the city’s mayor to scrap the project.

President Erdoğan said the 45-km (28-mile) Kanal Istanbul, which will link the Black Sea and the Marmara Sea, aims to ease traffic along the nearby Bosphorus Strait, one of the world’s busiest waterways, and prevent accidents there.

"KANAL ISTANBUL WILL BE INITIATED AS SOON AS POSSIBLE"

“We have to protect the history and culture of Istanbul. We have to solve all the problems of this city. But now, a multiplied betrayal is upcoming for Istanbul.” Kılıçdaroğlu has said. 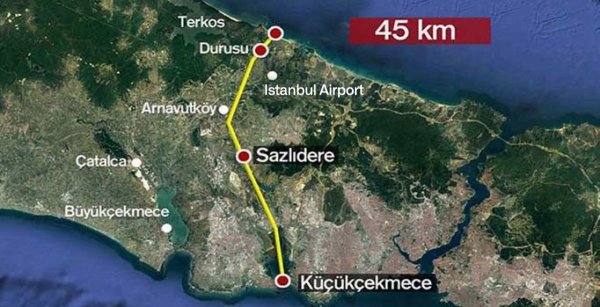 Despite Turkish opposition parties’ resistance against the project, minister of transportation and communication, Mehmet Cahit Turan, expressed that the ministry will put the project into practice “no matter what”.

“The planned canal is meant to provide relief to shipping traffic between the Black Sea and the Sea of Marmara, particularly oil tanker traffic through the Bosphorus. We have been making dreams come true since beginning the active duty. We will provide homeownership to 100,000 low-income families through installments, it will be just like paying rent,” Turan said.