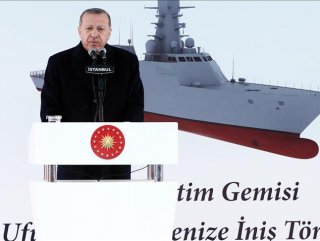 "The Turkish shipping industry has blown the cobwebs away and blossomed again over the last 16 years," Erdogan said at the launch ceremony in Tuzla, Istanbul of a new test and training ship, the Ufuk (A-591). "In today’s world, where preventative intelligence, especially signals intelligence, has gained vital importance, I believe the corvette Ufuk will fill a large gap,” Erdogan said.

He added that Turkey is one of the leading countries in the Mediterranean in both building and maintaining ships. “Along with its own needs, Turkey also builds ship for many developed countries in the world such as Norway, the U.K., the Netherlands, France, Germany and Italy,” he said, adding that around 2,000 vessels were repaired and renovated at the Tuzla shipyard alone.

Erdogan said the Ufuk is the first intel vessel produced using national resources and abilities, and technology few countries in the world possess. “The Ufuk corvette will be able to immediately detect threats to our national security, including international waters, for 45 days without pause and in harsh climates and maritime conditions,” he said.

"WE HAVE LARGE SUCCESSES AGAINST TERROR GROUPS"

On Turkey’s fight against terrorism, Erdogan said: "Over the last three years, we have scored many large successes against terror groups, especially Daesh and the PKK, who target our citizens’ lives and try to divide our country." He added that all of the terrorist groups which shed the blood of Muslims, from Daesh to al-Qaeda, carry Western-made weapons.

"The PYD/YPG murderers carrying out a genocide in northern Syria have our allies’ rockets, bombs and weapons in their hands," Erdogan said, referring to U.S. support for the YPG/PKK, a Syrian offshoot of the PKK terror group. In its more than 30-year terror campaign against Turkey, the PKK -- listed as a terrorist organization by Turkey, the U.S. and the EU -- has been responsible for the deaths of nearly 40,000 people, including many women and children.