The plane belonging to the Turkish Armed Forces landed in Turkey's capital Ankara on Saturday upon completing its evacuation operation from China's Wuhan city, the epicenter of the deadly outbreak.

Azerbaijan, Georgia and Albania thanked Turkey on Saturday after a Turkish military cargo plane traveled to China's coronavirus-hit city Wuhan to evacuate its own as well as those countries' nationals.

"WE ARE DEEPLY GRATEFUL TO TURKISH GOVRENMENT"

The Turkish Armed Forces' A400M type cargo plane departed from Wuhan on Saturday airlifting 42 people with 32 Turkish citizens, along with the citizens of Azerbaijan, Albania, and Georgia after health staff confirmed they did not carry any symptoms related to the fatal outbreak.

All the patients -- including 32 Turks, six Azerbaijanis, three Georgians and one Albania -- boarded the plane after they were found not to show coronavirus symptoms in initial examinations, the Health Ministry said before the evacuation operation. 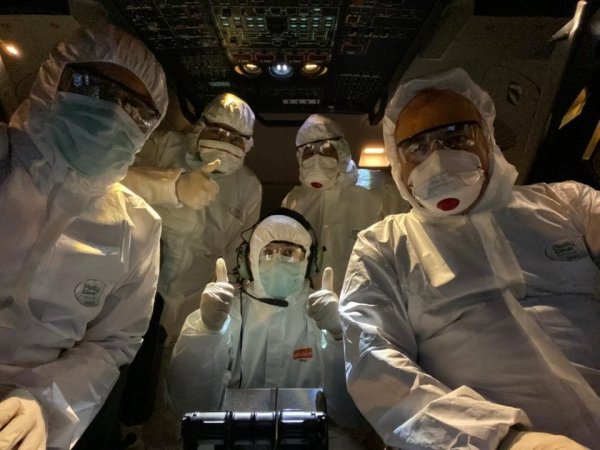 "Thank you to #Turkey for arranging the flight to evacuate Georgian citizens from #Wuhan, China amid an outbreak of coronavirus. Such acts of support further reaffirm strong partnership and solidarity between our two countries," Georgian Foreign Minister David Zalkaliani said on Twitter.

Azerbaijan's Foreign Ministry also thanked Turkey for evacuating its citizens, adding that the move was exemplary of the "brotherhood" between the to countries.

"The Azerbaijani citizens were evacuated together with the Turkish citizens from China's Wuhan city in a Turkish plane. This is another great example of Azerbaijan-Turkey brotherhood! Thank you, brotherly Turkey!" the ministry said on Twitter.

"Deeply grateful to #Turkey for helping to evacuate the #Albanian citizen studying in #Wuhan and assisting with the mandatory check-up & monotoring period. Greatly appreciative to our colleagues in @MFATurkey [Turkish Foreign Ministry] for their high-value support," Albania's Foreign Ministry also said on Twitter.