Grandchildren of those fallen in 1915 Gallipoli Battles of WWI to meet in Australia's Melbourne.

Turks and Australians will gather in Melbourne, Australia to remember the fallen soldiers of the Gallipoli campaign of 1915 in the Ottoman Empire during WWI.

A group of grandchildren of the Turkish-Ottoman troops who fought against the Australian and New Zealand Army Corps (ANZAC) soldiers will visit Melbourne on April 21-28 to mark the 104th anniversary of the first landing by ANZAC troops on the Gallipoli peninsula, according to the municipality of the southern Mersin province, the organizers of the visit. The ten-strong Turkish group will meet with grandchildren of the ANZAC troops. 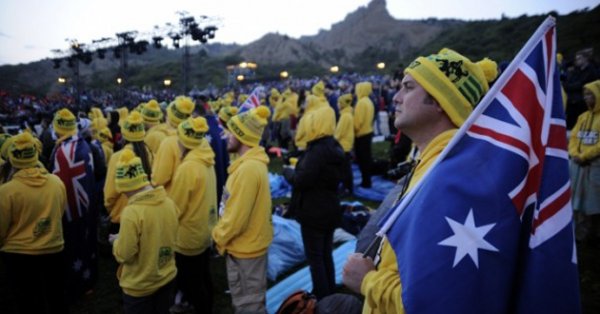 The unsuccessful eight-month campaign saw more than 44,000 British, Irish, French, Australian, New Zealand, Indian and Canadian troops and nearly 87,000 Turkish-Ottoman soldiers killed. April 25 is commemorated in Australia and New Zealand as the ANZAC Day and Gallipoli is seen as one of the defining events that ushered both countries towards nationhood.

The battle also forged links between Turkey, which emerged as a modern state shortly after the war, and the ANZAC countries.