Facing a staunch backlash in Congress over his decision to stand back Turkey's decision in northern Syria, Trump threatened Monday to destroy the Turkish economy.

The top lawmakers in the US House of Representatives and Senate on Monday condemned President Donald Trump’s decision to withdraw U.S. troops from northeastern Syria.

In an interview on Fox News, Senator Kindsey Graham had called the president “impulsive,” and denounced the decision as a “disaster in the making” which would empower Iran and give Daesh a new lease on life. 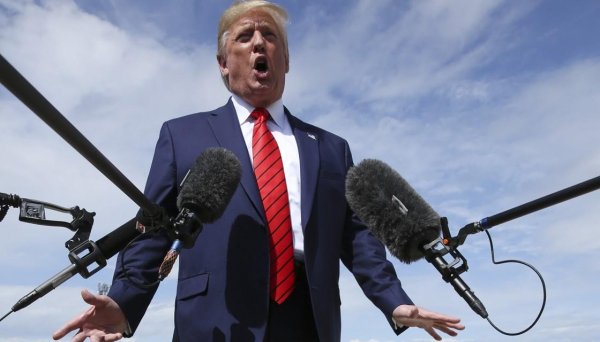 “This decision poses a dire threat to regional security and stability, and sends a dangerous message to Iran and Russia, as well as our allies, that the United States is no longer a trusted partner,” House Speaker Nancy Pelosi, a Democrat, said in a statement calling on Trump to “reverse this dangerous decision.”

"I'VE DONE IT BEFORE"

After the blasts against him, Trump shared a new series of tweets on Turkey’s Syria operation. Trump threatened Monday to destroy the Turkish economy if Ankara takes steps that are “off limits.”

"If Turkey does anything that I, in my great and unmatched wisdom, consider to be off limits, I will totally destroy and obliterate the Economy of Turkey (I’ve done before!)" Trump said on Twitter.

Trump says 'not siding with anybody' on Syria

US President Donald Trump said Monday he was not "siding with anybody" on Syria after his decision to pull back troops.

"I am not siding with anybody. We've been in Syria for many years. Syria was supposed to be a short-term hit. We were supposed to be in and out," Trump said during a press conference at the White House, adding he has "a good relationship" with his Turkish counterpart Recep Tayyip Erdogan.

Trump has been facing mounting pressure in Washington after the White House announced late Sunday that the US would pull back its forces in Syria ahead of a "long-planned" Turkish operation.

The Trump administration has ruled out any US support for the operation, and in the face of significant pushback, the president vowed "if Turkey does anything that I, in my great and unmatched wisdom, consider to be off limits, I will totally destroy and obliterate the economy of Turkey."

In his remarks, the US president said there were just 50 troops in the area where Ankara was planning to carry out the operation and did not want them to get hurt.

"I think there is a lot of pressure on Turkey. They have been fighting with the PKK for many years," said Trump, adding the former Obama administration started the dispute and "natural war" between Turkey and the PKK, citing reports.

A senior administration official speaking to reporters denied suggestions that Trump acted on the request of anone, emphasizing the president's priority has been the protection of US forces.

"There's no green light. We're protecting our troops, and the president's made it very clear, that there should be no untoward actions with respect to the Kurds or anyone else," he said.

Trump says 'not siding with anybody' on Syria