US news channel ABC has been busted after it shared a scandalous shooting video over the weekend and told its viewers that it is the footage of Turkey bombing the "Kurds" in Syria.

"This video right here appearing to show Turkey's military bombing Kurd civilians in a Syrian border town. The Kurds, who fought alongside the US against ISIS now horrific reports of atrocities committed by Turkish-backed fighters on those very allies" -ABC News said, deliberately lying to Americans who try to learn what is going on in the world. 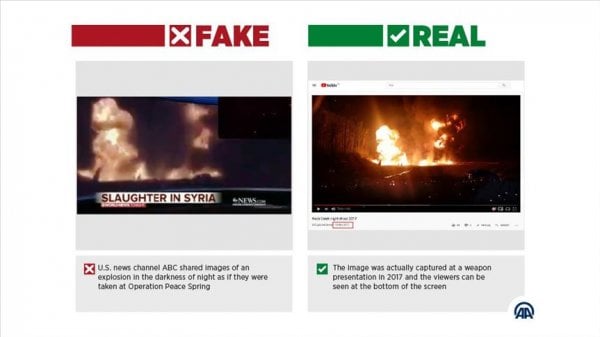 However, the video at stake was from a Knob Creek Machine Gun shoot in the US, which was shot in the U.S. state of Kentucky back in April 2016 and loaded to Youtube in 2017.

In the original video, one can actually see onlookers with their cell phones.

Earlier in the day, ABC issued a correction and apology, saying they took down the video, which was aired on “World News Tonight" Sunday and “Good Morning America” on Monday morning.

It said the move came after questions were raised about its accuracy.

TRUMP: IT'S A BIG SCANDAL

US President Donald Trump lashed out Monday at ABC News for using a video from a Kentucky gun range and falsely claiming it as footage of Turkey bombing Kurdish civilians in Syria.

"A big scandal at @ABC News. They got caught using really gruesome FAKE footage of the Turks bombing in Syria," Trump said on Twitter. "A real disgrace."