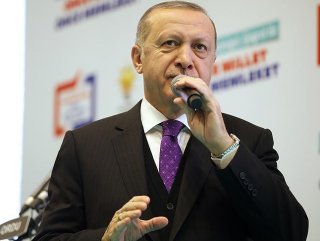 Turkey has devastated all terror groups at home and abroad, Turkish president said on Sunday.

"We buried all terrorist groups in the ground in Afrin and Jarabulus, Syria and in the Mt. Cudi area in southeast Turkey," Recep Tayyip Erdogan told a rally introducing mayoral candidates for the Black Sea province of Ordu.

"You can't divide us. We will scratch out the eyes of anyone with designs on our territories," he warned.

Jan. 20 is the first anniversary of Operation Olive Branch, a Turkish cross-border anti-terror operation against the YPG/PKK and Daesh in Syrian border regions.

In its more than 30-year terror campaign against Turkey, the PKK -- listed as a terrorist organization by Turkey, the U.S., and the European Union -- has been responsible for the deaths of some 40,000 people.

Operation Euphrates Shield, from August 2016 to March 2017, sought to improve security, support coalition forces, and eliminate the terror threat in the northern Syrian regions of Jarabulus, Al-Rai, Al-Bab, and Azaz.

Local elections are set to be held across Turkey on March 31, 2019.