Saudi Arabia is in the interfaith dialogue with Vatican

The video footages of the agreement made between Saudi Arabia and Vatican were featured.

In the previous days, Saudi Arabia had agreed to a deal with the Vatican to build Christian churches in the Kingdom, a potentially stunning development for the country that's home to Islam’s holiest site, Madiah. 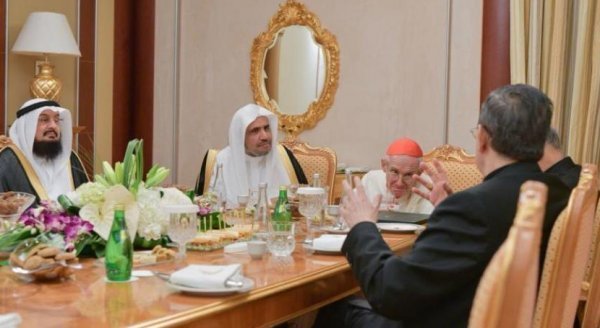 This agreement’s video footages were featured. The agreement was signed by the Secretary General of the Muslim World League Sheikh Mohammed bin Abdel Karim Al-Issa and the President of the Pontifical Council for Inter-religious Dialogue in the Vatican and the French cardinal of the Catholic Church Jean-Louis Tauran to achieve mutual goals between both sides.

Saudi Arabia is in the interfaith dialogue with Vatican WATCH

Saudi Arabia’s agreement with the Vatican was signed to build churches for Christian citizens in Madiah. Even if the agreement was denied by Vatican, the footages released shows the exact opposite.