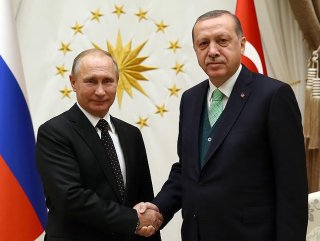 Working together, Turkey and Russia will continue to bolster security in the Eurasia region, said Russian President Vladimir Putin on Sunday.

"I'm sure Turkey and Russia will go on to strengthen security in Eurasia," Putin said on the Kremlin website, in a message extending New Year’s greetings to Turkish President Recep Tayyip Erdogan.

COOPERATION WILL CONTINUE BETWEEN BOTH COUNTRY

Putin also expressed his firm belief about Russian and Turkish cooperation in helping peace, security, and stability in the region.

Amid "auspicious development" in bilateral ties, Putin noted approvingly, Turkey and Russia are making decisive contributions to fighting terrorism in Syria and advancing political settlement there.

"The construction of the first unit of the Akkuyu nuclear power plant [in Mersin, southern Turkey] has begun and the offshore section of the Turkish Stream gas pipeline has been built. New, promising areas of bilateral cooperation have been outlined," Putin said in his message.

Erdogan and Putin launched construction of the project at a ceremony in the Turkish capital Ankara on April 3.

The plant, with four units, each boasting a capacity of 1,200 megawatts, will meet about 10 percent of Turkey's electricity needs.

In a ceremony, Erdogan and Putin marked the completion of TurkStream's offshore section on Nov. 19.

The TurkStream gas pipeline, crossing beneath the Black Sea from Russia to Turkey and set to stretch to Turkey's neighbors, will have a capacity of 31.5 billion cubic meters (bcm).

Turkey will receive 15.75 bcm of the gas, while the remainder will go to Europe.