Presidents Erdoğan and Putin agree on 'weapons-free zone' in Idlib

Turkey and Russia on Monday agreed to turn Syria's northwestern Idlib province into a demilitarized zone.

President Erdoğan and Russian President Putin met in Russia's coastal city of Sochi. "We have agreed on the establishment of a weapons-free zone between the opposition- and [Assad] regime-controlled areas," President Erdoğan said in a news conference with his Russian counterpart Vladimir Putin following a meeting between the two leaders.

Following the news conference, Ankara and Moscow signed a memorandum of understanding calling for the stabilization of the situation in Idlib's de-escalation zone, in which acts of aggression are prohibited. "I believe that with this memorandum, we have prevented a great humanitarian crisis in Idlib," Erdoğan said.

"Russia and Turkey reaffirmed their determination to fight terrorism in Syria in all its forms. [...] The practical implementation of the planned steps will give an additional impetus to the process of a political settlement of the Syrian conflict, will accelerate work on the Geneva platform and will contribute to the return of peace to the Syrian land." The Russian president said that this approach was supported by the Syrian side. He said consultations with Damascus could be held in the near future. 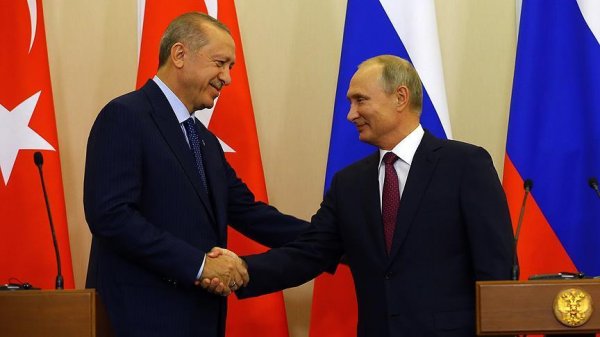 "ALL HEAVY WEAPONS HAD TO BE DRAWN"

Putin said the demilitarized zone will extend between 15 to 20 kilometers (9-12 miles) deep into Idlib by Oct. 15. He added that the establishment of the zone would be accompanied by the withdrawal of armed groups, including the al-Nusra Front. The Russian President said all heavy weapons had to be withdrawn from the zone by Oct. 10, according to Erdoğan’s proposal. This includes tanks, rocket launchers, guns and mortars of all opposition groups. He also said Russia and Turkey would restore transit routes between Syria's Aleppo, Latakia, Hama by the end of 2018.