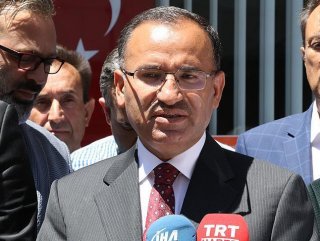 "IT IS A PKK ATTACK"

Since it resumed its armed campaign against Turkey in July 2015, the PKK -- listed as a terrorist organization by Turkey, the U.S. and the EU -- has been responsible for the deaths of more than 1,200 Turkish security personnel and civilians.

Bozdag said that those responsible for the attack will soon face justice.

"I strongly believe that those who have carried out this attack and those who participated in this attack will be brought to account," he said.

"To destroy terrorism, to destroy terrorists, and to ensure our nation holds elections in a free environment, we will continue to make every effort, every endeavor," he added, referring to the June 24 presidential and parliamentary elections.

Although Yildiz survived the attack with no injuries, his older brother Mehmet Ali Yildiz died after succumbing to his wounds in the hospital.

The Sanliurfa Governorship said in a statement that Yildiz, accompanied by a group of people, was visiting tradesmen in the center of Suruc when a discussion turned into a fight.