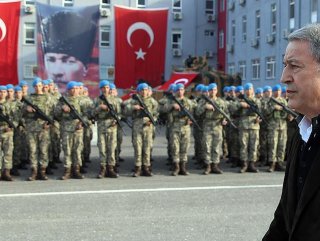 “The current Syrian problem areas are Manbij and east of the Euphrates; our plans, preparations and logistics are completed.

"The operations in Manbij and east of the Euphrates will start when the right time comes,” said Hulusi Akar in Hatay, southern Turkey, marking the first anniversary of the start of Turkey’s Operation Olive Branch.

Turkish Chief of General Staff Gen. Gen. Yasar Guler and other commanders accompanied Akar on a visit to a commando team involved in the counter-terrorist operation.

ONLY TARGETS DEASH AND YPG

“We have no problems with our Kurdish brothers or Arab brothers in Syria and Iraq. Our only targets are the terrorist Daesh and PKK/YPG," added Akar.

“We will never allow a terrorist state or terror corridor at our southern border. We will continue to fight with terrorists until they all neutralized,” he said.

President Recep Tayyip Erdogan also spoke with Akar and the commando team in a video call.

Erdogan stressed that Turkey's fight against terrorism will continue without hesitation in Syria's Afrin, Jarabulus, and Al-Bab regions.

A mission east of the Euphrates River, which Turkey’s leadership has been suggesting for months, would follow two successful cross-border Turkish operations into Syria since 2016 -- Euphrates Shield and Olive Branch -- both meant to eradicate the presence of YPG/PKK and Daesh terrorists near Turkey’s borders.