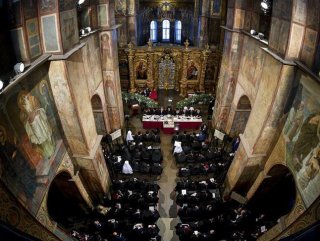 Fener says it has right to grant the status, Moscow called it a violation of canon law.

Nicholas Papachristou, Director of the Fener Greek Orthodox Patriarchate’s Press and Communications Office, told Anadolu Agency that Fener Patriarchate has the right to grant autocephaly to the Ukrainian Orthodox Church.

The Patriarchate "has the exclusive privilege and right to grant the status of Autocephaly to local churches when specific pastoral needs and conditions call for such action," Papachristou said.

He said the Patriarchate "rightly" decided to grant autocephaly to the church of Ukraine.

FENER'S ACTIONS ARE A GROSS VIOLATION OF CANNON LAW

Papachristou said for the last five centuries, Fener Patriarchate has granted autocephaly to many local churches like churches of Russia, Greece, Serbia, Romania and others.

In all of these cases, including the most recent one concerning the Church of Ukraine, Fener Patriarchate acted within the framework of its canonical duty and responsibility in order to ensure the unity of Orthodoxy, he noted.

He added it would be impossible for the Fener Patriarchate to exhibit any less interest for its "Orthodox brothers and sisters" in Ukraine than it has already demonstrated to its "fellow Orthodox brethren" in Russia, Greece, Bulgaria and elsewhere.

On the other hand, Vladimir Legoyda, head of the Synodal Department for Church relations with society and media for the Moscow Orthodox Patriarchate, told Anadolu Agency the granting of tomos of autocephaly by Fener Patriarchate to Ukrainian President Poroshenko is a violation of canon law.

"The Russian Orthodox Church believes that Fener's actions are a gross violation of canon law, its interference in the internal affairs of the canonical Ukrainian Orthodox Church, which is part of the Moscow Patriarchate.

Apart from the Ukrainian authorities and a group of political radicals, no one asked Patriarch Bartholomew about granting a tomos. The canonical Ukrainian Orthodox Church, which unites the majority of believers, unanimously condemned his actions," Legoyda said.

Legoyda said Fener Patriarchate colluded with the Ukrainian authorities, "acting as the executor of President Poroshenko", in order to assist him in the election campaign.

"This significantly undermined the authority of Fener in the Orthodox world and practically destroyed the trust to Patriarch Bartholomew as the first among equals among the primates of the local churches," Legoyda stressed.

Legoyda added that the Russian Orthodox Church stated that it was impossible to continue the Eucharistic communion with the Fener Patriarchate.

The Ukrainian Autocephalous Orthodox Church did not respond to Anadolu Agency's request for comment on the issue.

THE DECISION WILL STRENGHTEN UKRANIAN CHURCH IN THE LONG RUN

"This is a big problem from Russian point of view. Because they consider Ukraine and Belarus as part of the Russian world," Professor Oktay Tanrisever from Ankara's Middle East Technical University International Relations Department told Anadolu Agency, referring to the granting of status of autocephaly to Ukrainian Orthodox Church.

He said Orthodox Christian people in Ukraine and Belarus share some loyalty to Moscow Patriarchate.

"Although," he added, "it is a religious issue, because of its impact for nationalism in Ukraine, probably it will deteriorate relations between Moscow and Kiev."

By the autocephaly, Ukrainian nationalists gained justification for their criticism of presence of Russian Orthodox Church in Ukraine, according to Tanrisever.

"But this cannot be resolved in a short time period. It is a decision by an external player: The Church in Istanbul. But the people in Ukraine will make their decision by themselves."

The short-term impact of the autocephaly will be minimum, he went one to say and added: "But in the long run, this will strengthen the position of Ukrainian Orthodox Church."

Because Autocephalous Ukrainian Orhodox Church will use the granting of autocephaly as a religious argument to gain more supporters from Orthodox Christians who belong to Moscow Patriarchate, Tanrisever explained.

Tanrisever said these developments show that relations between Ukraine and Russia will get tense and more conflictual.

"The timing of the decision was also interesting. It was just before the Ukrainian elections. Ukrainian nationalists will use this decision to strengthen their position," Tanrisever said.

A VERY IMPORTENT STEP FOR REAL INDEPENDENT OF UKRAINE

Professor Hakan Kirimli, from Ankara's Bilkent University International Relations Department, also said after Ukraine received independence in 1991, the autocephaly of Ukrainian Church could have been realized, but then Ukrainian governments were under Russian pressure and could not do it.

Kirimli said when Russia invaded Ukraine's Crimea and Donbass in 2014 and then Ukrainian President Viktor Yanukovich fled to Russia, everything became more clear and as Poroshenko became president, he took the issue seriously and the autocephaly was achieved.

"It is a very important step for real independency of Ukraine and the Orthodox people of Ukraine to be free from Moscow's influence," Kirimli said.

Before giving the tomos of autocephaly to Poroshenko, Patriarch Bartholomew had earlier requested recognition of the Ukrainian church's new status by sending letters to 13 Orthodox patriarchates and churches.

But Russian Patriarch Kirill also sent letters asking the churches and patriarchates to reject the split.

On Oct. 11, 2018, the Fener Greek Orthodox Patriarchate greenlit the process for the Ukrainian church's independence, over Russia’s objections, and with Ukrainian-Russian geopolitical tensions in the background.

The independence decision comes in the wake of Russia's illegal annexation of Ukraine's Crimean peninsula in 2014 -- a move not recognized by either Turkey or the UN -- as well as unrest on Ukraine's eastern border with Russia.