Olof Skoog, ambassador and permanent representative of Sweden to the UN, said at the organization's headquarters in New York that a full-scale military operation in Idlib would escalate an already dangerous conflict in a volatile region.

"PROTECTING CIVILIANS IS A PRIORITY"

"Idlib is the last remaining de-escalation zone in Syria that the Astana guarantors committed to safeguarding. We express our support for the urgent diplomatic efforts being made to this end by Turkey and the United Nations," said Skoog. Skoog demanded that Russia and Iran uphold "ceasefire and de-escalation arrangements they have previously agreed, including protecting civilians as a matter of priority". 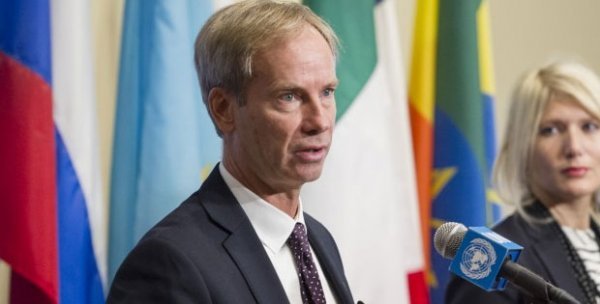 The Syrian regime has recently announced plans to launch a major military offensive in the area, which is controlled by various armed opposition groups. Russian warplanes on Tuesday pounded civilian and opposition targets in Idlib. President Erdoğan, Russian President Vladimir Putin and Iranian President Hassan Rouhani are scheduled to meet Friday in Tehran for a trilateral summit on Syria.