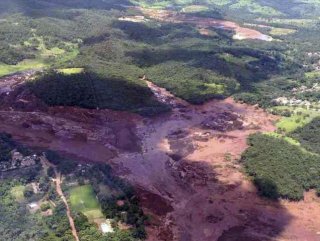 The death toll from a ruptured tailings dam in the southeast Brazilian state of Minas Gerais reached to 34, local media reported on Saturday.

The fire department said 23 people are in the hospital.

The company, Vale SA, said in a statement that mining waste from the dam reached the nearby town of Brumadinho and evacuation efforts were underway.

Mostly mine workers, at least 427 people were at the scene, and 279 of them have been rescued, according to the company’s CEO.

The exact cause of the collapse is still unknown.

Another mining waste dam managed by Vale and Australia’s BHP Billiton broke in 2015, killing 19 and rendering hundreds homeless in the city of Mariana in Minas Gerais state.